I’ve had a busy weekend digging into authors with interesting and compelling novels. Sunday Night I found myself sucked into a Facebook event with the host being Matthew Harrill. He had just recently released the final novel to his series ‘The ARC Chronicles’ Hellbeast. Words can’t even describe the imagination and determination Matt has for his books and characters, so today, I had to have him jump on the series. Here’s a little bit about him and we’ll bounce into the interview. 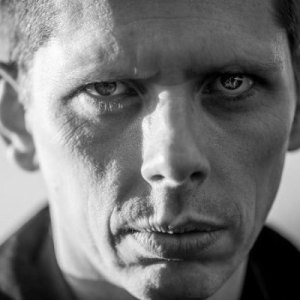 Born and raised in Bristol, England, Matthew W Harrill is an international award-winning horror author. His series, ‘The ARC Chronicles’ consists of Hellbounce (which has received acclaim at the Halloween Book Festival, the London Book Festival and most recently the 2015 International Book Awards), Hellborne and the final book of the series, Hellbeast is imminent.

In addition to his mentor David Farland (The Runelords, The Courtship of Princess Leia [as Dave Wolverton]), Matt is always thankful to know the British author Juliet E McKenna, who has helped him countless times. He is a fan of fantasy, loving Robert Jordan’s ‘Wheel of Time’ series. He also has a lot of time for the truly bizarre horror of H P Lovecraft, citing this as an influence on his work. He also cites the fictional author ‘Hank Moody’ as an influence.

Matthew has worked as a labourer, a barman, a cleaner, a joiners mate. In addition he has dabbled in commercial insurance and has for the past 12 years implemented share plans for Xerox.

When not working, Matthew enjoys tennis with his son, watching movies and television series such as Supernatural and Grimm, blogging and cookery.

William: Thank you for joining us today, Matt. Who or what inspired you to write ‘The Arc Chronicles’?

Matt: I wanted to explore the greater consequences of what might happen if Hell actually froze over. What would cause it? Where would the inhabitants of Hell go? What would they do to guarantee survival? In terms of who, my mentor David Farland was a heavy influence. When I came up with the idea, a two hour brainstorm set me on the course to the series, and I have not stopped in nearly 4 years.

William: Wow, I can tell you were extremely passionate about this series. If any readers haven’t already picked up his book, do it today because this is an awesome story to get lost into. Here’s a quick blurb of Hellbeast:

The fate of the world is balanced on a knife-edge. Despite everything Madden and Eva have been through to prevent it, the ARC Council is in disarray, demons roam the Earth. The Apocalypse is closer than ever. The solution couldn’t be further from her grasp.

William: What can you tell our readers about Madden and Eva in the story? And a little insight on how you developed the two characters?

Matt: Madden and Eva are based on real people. Ewa is a young lady who I used to work with who pestered me to start writing again after a long break, and Chris Madden helped solve the conundrum of ‘what scares a demon?’ for me. Now Eva Ross and Madden Scott are very different to their ‘owners’ – Madden especially. He was born into privilege and never really had to do a thing for himself. When an unfortunate event compounded that fact, he just went with it. Eva on the other hand is very clever, very driven and has worked hard to get where she is. And as the song goes… opposites attract….

William: ‘Owners’ I absolutely love it! When you are writing, are there any specific bands or type of music you listen to that sets the mood for your stories? How about outside of writing?

Matt: It depends on my location. On the bus, where I write during the commute and I will write to whatever is playing on my iphone, and that could be pop, rock, instrumental, or pure idiocy. I have it all.

In the office, I have set favourites, all lyricless: Deep and Chilled Euphoria (Various Artists)

Desderii Marginis: That which is tragic and timeless

God is an Astronaut: All is Violent, all is bright

William: Those are some interesting pieces for the office. I’ll have to go through and check them out! Do you have any specific quotes in each novel of ‘The ARC Chronicles’ that just press at you?

Matt: “Demons Don’t Always Hide In The Dark” for Hellbounce

“Heroes Don’t Always Walk In The Light” for Hellbeast

William: Quotes to live by today! How long have you been writing this series and how did you find yourself writing in this genre?

Matt: Since February 2012, when I had the epiphany about Hell freezing over. When I came up with the idea, it just fit. The ARC Chronicles would never be a political thriller…. Though I actually think there are a lot of elements of many other genres in my writing.

William: When an author successfully molds multiple genres in a book, it is a sweet victory for everyone. I’ve really enjoyed the enthusiasm you’ve brought with your novels. Now, stories like the one you’ve written normally have biblical significance to it, will we see technology advancements mold into it?

Matt: It is very biblical. I draw on a lot of elements of the bible, twist some, totally rewrite others. The technology comes from the necessity in the series to combat the biblical element, which in itself has significant technological advancement.

William: That answer gave me goosebumps, Matt. I love it when authors do these types of changes in a story. Now, before we wrap things up do you have any advice to writers, particularly things to avoid, while writing an apocalyptic world?

Matt: Keep it real. My apocalyptic world is present day. I wanted real settings that you could go to and imagine what happens in the books. Aside from one very obvious exception in book 3, everything is real. Humans can associate with real. It gives them a sense of comfort, something to grasp on to. It’s not all devastation… that is to come in the next series…

William: Thanks for doing this today, Matt. Before we go, I wanted to leave a sample for anyone jaw dropped by the ideas of Matt’s ‘Arc Chronicles’. Thanks again, Matt for providing an awesome sample for my readers!

Two camels sat side-by-side, evidently content to wait for their owner to invite them to stand. One chewed feed, its jaw moving laterally. The animals did not need feeding but the treat helped cement the bond. Their owner had been with them for a while. He knew their temperament.

It was the middle of the afternoon; the temperature approached forty-five degrees Celsius. The sun blazed in the cerulean desert sky, roasting the crusted hardpan. There was little, if any, moisture in the Gobi desert. Camels were the only creatures able cross the great expanses and not perish. They were also much more anonymous than off-roaders.

He had been crisscrossing the desert for six months now, seeking any sign of clues that related to a Holy City in the sky. The Convocation of the Sacred Fire had been convinced of the city’s existence long before its media debut only weeks ago. His job was to find the answers.

Now, an unprecedented event overshadowed even that. In mid-air, maybe three or four hundred feet above ground level, perhaps two miles in the distance, a cloud had formed, moisture spinning from nowhere to coalesce directly above the waves of heat radiating from the ground.

The cloud, which should have been forced up by the thermals, remained stationary, ever growing, black and threatening. Sparks of lightning began to appear around the outer rim of the cloud, dancing about its surface. Then something the watcher had never before witnessed began to occur. Bolts of lightning launched up from the ground, touching the base of the cloud and working their way up until a continual chain of lightning fed the center. The bright white core of the cloud began to expand; the noise that much concentrated heat combusting generated was almost too much for him.

And then, as quickly as the pyrotechnics had started, the show stopped. The lightning winked out and the cloud was finally forced into the sky. The only indication it was ever there was the tangy stink of concentrated ozone.

The observer reached under his robes, bringing out a sat- phone. He pressed one button, a prepared number.

“This is Baxter,” he said in a posh English accent. “Sir, it has begun.”

If you haven’t already checked out Matthew Harrill, go to the links below to find him. You will be blown from this world when you see what is boiling inside this author’s head!

For any authors, if you are looking to interview on the series “Interview with the Awethors” Please contact by email at: lloyd.jr@aol.com